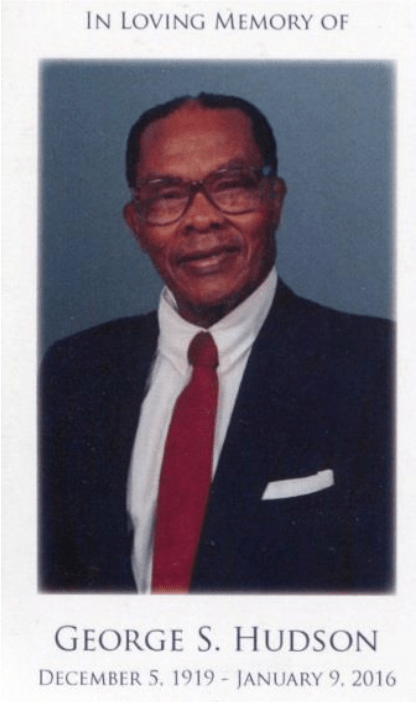 George S. Hudson, founding father of the West Indian Social Club of Hartford Inc. passed quietly at home in Windsor, Ct., January 9, 2016 surrounded by family. Mr. Hudson was born in St. Catherine, Jamaica on December 5th, 1919 to Cecil and Matilda Hudson. He and wife Rebecca, who predeceased him are the parents of eight children: William, Margie, Carolyn, Shirley, George, Beverly, Cecil and Joyce. George also has 10 grandchildren, 4 great-grandchildren, and many nieces and nephews. George left Jamaica decades ago during World War ll and arrived in Hartford, Connecticut in 1943 having departed from Kingston Harbor on the first ship leaving for the Americas, S/S Shanks on May 7, 1943. As an immigrant farm worker, he spent 6 years working on the tobacco farm in Windsor, Ct and upon his marriage to Rebecca, ended his contract on the farm, and returned to Jamaica to arrange his documentation for returned residency and legal status in the United States.

Mr. Hudson is one of the founders of the West Indian Social Club of Hartford started in 1950. He attended the first meetings that took place at the home of Oliver Milward and subsequent meetings at St. Benedicts

called the Black American club on Windsor Street called the Sundown where Jamaican farm workers went for social interaction, but even there felt a need to have social events and entertainment more in line with his Jamaican upbringing and culture. As George put it, “we put our nickels and dimes together and formed the WISC.” They went from house meetings to church meetings, eventually obtaining a house on Barbour St. and subsequently settling at its current location on 3340 Main St., Hartford. George is also a founding member of the Caribbean American Society. George was honored last year at the West Indian Social Clubs’ 65th Anniversary on May 2, 2015 for a second time and receiving a Lifetime Achievement Award for his many accomplishments. The WISC is the third oldest Jamaican Diaspora organization in the United States and the largest with a membership of over 200 members.

George and wife Rebecca were married at St. Monica’s Mission Church in 1948 and George spent 22 years as superintendent of the Sunday school. A wise, gentle and humble

man, George Hudson will be greatly missed. Mr. Hudson leaves behind a fine legacy of accomplishments that will carry forward for many years to come.

The Women in Science